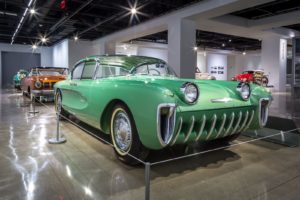 The 1955 Chevrolet Biscayne was not only used by General Motors to test the public’s opinion of the styling cues but also highlighted and showcased the new V8 engine at the 1955 General Motors Motorama.

The Bortz Auto Collection was founded by Joseph Bortz who has saved over forty American concept cars of the 1950s through 2003 of all makes including the
1955 Chevrolet Biscayne SO-2249 show car (see attached). Joe Bortz will be on the premises December 3, 2015 for the press day and December 5, 2015 for the grand opening.