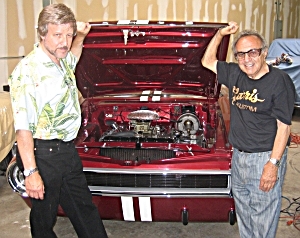 In July 2006, George Barris visited the Bortz Auto Collection, and explained that he was designing cars for movies and looking for new design features to put into his movie cars. He was hopeful that some new ideas for these cars could be spawned from the design techniques he’d see on the various concept cars in the Bortz collection.Barris also wanted to see his very favorite “semi-custom car,” that he produced in the late 1950s, the John Seaton Chevrolet. Barris favors this car so much that he put it on the cover of the DVD of his life, which is now being sold through his Web site, www.Barris.com.

At the first stop, George was very interested in the Brooks Stevens 1955-’56 Cadillac Val Kyrie. The front bumper of this car is very unique, and Brooks Stevens designed it to accentuate the fact that the car was a V-8. This particular car toured Europe, and being a V-8, the car was a hit in the land of four- and six-cylinder cars.

Barris was also interested in examining the 1953 Pontiac Bonneville Special, and he made special note of the interior and dashboard of this car and suggested that some of these ideas may be incorporated into some of the future movie cars that he is going to build.

Barris also was taken back by the 1964 Dodge Hemi Charger show car that was recently featured at the international Chicago Auto Show. This car was

first featured at the International Auto Show in 1964, and was again featured there in 2005. Upon seeing the car, Barris pointed out the low-cut windshield and said he used the same idea on a 1960s Mercury concept car that he produced for the Ford Motor Co.

Another car in the Bortz Auto Collection that dazzled Barris was the 1957-’58 Chrysler Ghia Diablo ‘ Barris felt that this show car had features he could use in some of the cars that he is currently producing.

While at the collection, Barris also had an opportunity to comment on the Bortz Auto Collection’s latest acquisition, the 1966 Duesenberg that was designed by Virgil Exner and produced by Ghia for the revival of the Duesenberg Co. This was the only Duesenberg produced by the company before it declared bankruptcy. Barris also examined the 1953 Pontiac Parisienne and noted how a GM designer had the chrome trim of the roofline for the car flow and follow the lines of the car.

From that point, a ride was taken to where two of the Bortz historic custom cars were stored. It was also at this time that Barris was reunited with his 1955 Chevrolet “John Seaton Semi-Kustom” car. It was obvious that he felt nostalgic toward the car and was glad to see it after so many years. He immediately started pointing out why he felt that this was his favorite semi-custom car.

custom design features added on to a standard production body. The final type is a complete custom, in which the body and chassis have been made from scratch, rather than a production car.

In the case of the John Seaton car, George explained how the rear wheel wells were opened up and a tube was used to define the new rear wheel opening. He also mentioned that, in the 1950s, customizers didn’t have all sorts of options for tubing, so they used an electrical conduit tubing to define the opening before adding sheet metal and lead. He made special note as to how he had the scalloping on this car go from the front fender line to the back fender and follow the shape of the rear fender. Barris was quick to point out the rear taillight had been custom made, not only in its metal design, but the actual plastic of the lens.

Barris also pointed out the special quad headlights that were formed into the metal fenders with metal and lead and his special bullet grille ‘ in which he had the bullets designed to match the bullets in the Lucas headlights.

When it came to the interior, Barris made special note of how they used all Stewart Warner gauges to make up the special dashboard. He also made endless comments about the engine compartment, which was fully detailed in chrome and showed some of the unique Barris features, including a special radiator cap that he made through his company at that time called IP

Productions. This was a radiator cap that was offered for all radiators of all sizes in 1955-’65, and its trademark was the special ribbed top.

I’ve always said that the great wonders of collecting cars are not just the enjoyment and pride of owning these cars, but in the fantastic people that we all get to meet. Anyone who gets to meet Barris at any of the shows he attends will realize they had a great opportunity to meet one of the hobby’s heroes.